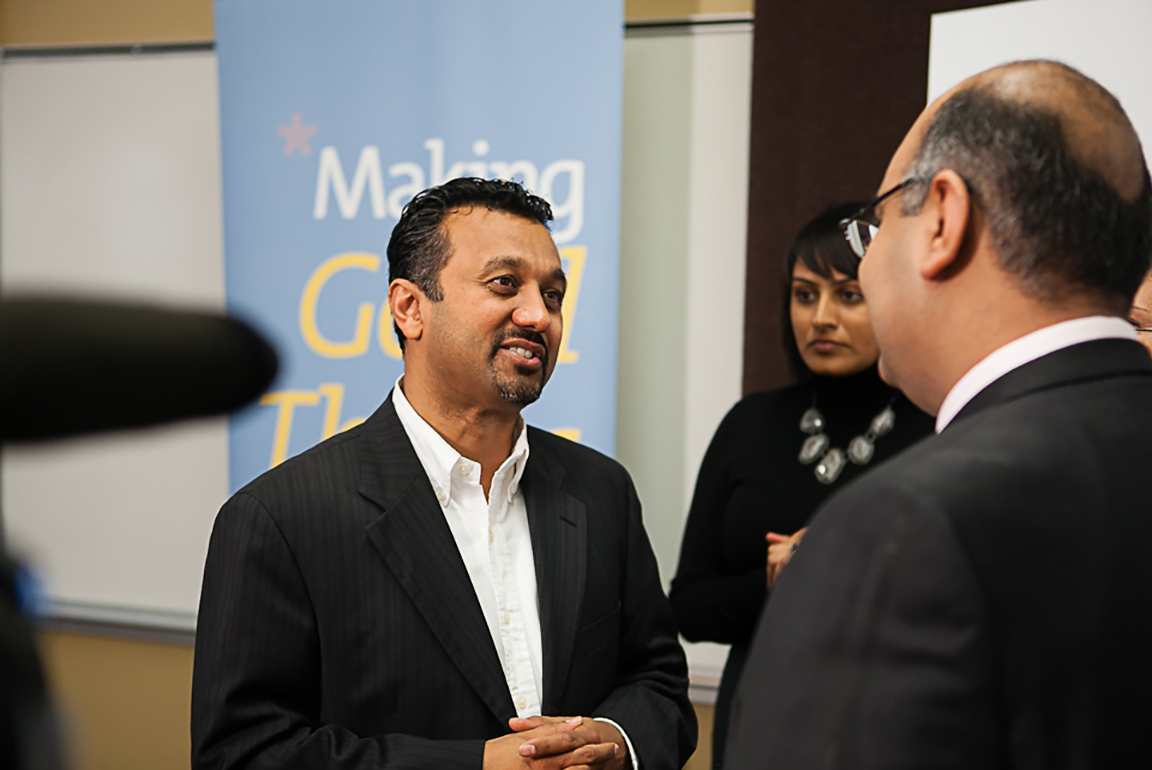 In 2012, international immigration in Manitoba dipped from the year prior—the first decline in a decade. One local settlement organization warned the drop could dent Manitoba’s labour supply and have a “drastic” impact on the province’s economic growth.

Fortunately, the Recognition Counts program also entered the picture in 2012. And in 2022, Assiniboine Credit Union marked the 10th anniversary of its partnership with this landmark program, which provides loans to highly skilled, foreign-trained immigrants so they can obtain credentials to practice their professions in Manitoba.

It’s time to celebrate this important 10-year milestone and the deep, lasting impact of Recognition Counts on the people and economy of this province.

Back in 2012, Recognition Counts began as a two-year pilot program. It originally offered loans of up to $10,000 for highly skilled immigrants (like nurses, doctors, engineers, dentists, pharmacists and some trades) seeking Canadian qualifications to practice in Manitoba. The goal was to help participants support themselves while they obtained the education, training and credentials necessary to re-enter their chosen professional career path in this province.

“It’s pretty awesome to think that 10 years have come and gone since launching this pilot,” says Nigel Mohammed, Director of ACU’s Community Financial Centre, which also celebrates its 10th anniversary in 2022. Nigel has worked closely on Recognition Counts from day one.

“This program has been fundamentally life-changing for over 300 families, individuals and youth during the past decade,” Nigel explains. “Without such a resource in the community, there are so many individuals who would not be given an opportunity to participate and fully contribute to our local economy if they had still been stuck in survival jobs or were forced to choose a different profession.”

SEED, a community services non-profit based in Winnipeg, is ACU’s key delivery partner for Recognition Counts.

“When immigrants come here as professionals, especially those in regulated professions, even though they have extensive experience in the field, their qualifications are not recognized,” explains Nef. “The process (of re-qualifying) is usually long, expensive and takes a heavier toll on professionals when they are still trying to start a new life. Some of our clients need to stop working to become full-time students or attend training full-time. So that financial loan piece is very important, not only to pay for their qualification process but also to cover their living expenses.”

Recognition Counts also gives participants the opportunity to access a loan without any work experience or credit history here in Canada, which Nef cites as a common economic obstacle for newcomers.

How SEED Winnipeg and ACU are building community and financial literacy

The teams at ACU and within the CFC are celebrating the 10th anniversary of a partnership as well as a program.

Nigel points out that many non-profit organizations like SEED Winnipeg deliver similar programs on their own, using funds provided directly from the federal government. But thanks to SEED Winnipeg’s alliance with ACU, Recognition Counts offers participants access to much needed funds thereby allowing them to pursue accreditation  as well as financial literacy and counselling sessions, brightening their prospects long after they finish the program.

“SEED Winnipeg decided they would align themselves with a partner like ACU, which has similar values but also brings to the table the expertise around lending, financing and banking. We all get together around these individuals to really give them a chance for success beyond the transaction of a loan,” says Nigel.

After successfully re-entering their profession, the average client sees their income increase by $43,000 per year – a substantial ROI from a loan of $10,000. Besides investing in individual participants, Recognition Counts is an important investment in the future of Manitoba, Nef explains.

“If the people who complete this program increase their income, they rely less on government support, they pay more taxes. But on a personal level, they can save for a down payment on a home. They can plan and save for their retirement or for their children’s education when their finances are stable. They have more time with their kids and more time to participate in community activities. So the benefits just ripple around the clients out to their family, to the community and to Canada as a whole,” she says.

Since Recognition Counts started in 2012, the loan amount has been raised from $10,000 to $15,000. What hasn’t changed is the need to help skilled newcomers re-enter their professional paths.

That need has arguably increased; the overall number of international immigrants to Manitoba has risen during the past decade, from 13,391 in 2012 to 16,587 in 2021. After that worrisome decline in 2012, annual immigration has rebounded in our province.

Although Recognition Counts provides critical financial support, clients must also tap into their own deep, personal reserves of commitment and hard work to reach their ultimate goal of returning to professions they love. Nef recalls an email she received earlier this year from a client who finally re-qualified, after a decade, to practice medicine in Manitoba.

“He said, ‘I’m working as a physician in Altona.’ It’s been a 10-year process for him! But he never gave up. He started working as a gas station attendant when he first got here. My gosh, just the perseverance, the resolve, the resilience,” she marvels.

Learn more about the Recognition Counts program, including the eligibility criteria and how to apply with SEED Winnipeg.

For assistance with savings, investing, financial planning and more, including how ACU can support your career goals, book an appointment online today.