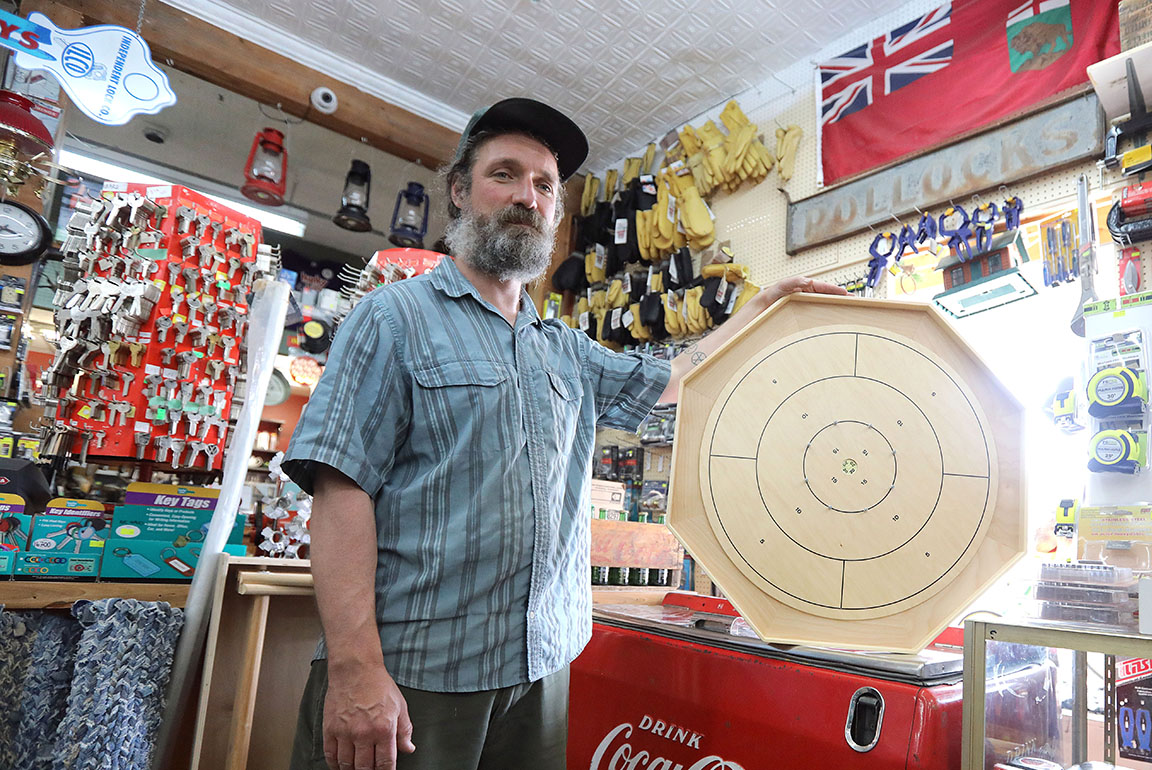 Since 1922, homeowners, contractors and craftspeople of all levels have frequented a North End hardware store with unmistakable signage in Winnipeg’s Luxton neighbourhood. The Main Street store had become a staple of the community — pun intended. But 10 years ago, the owners were ready to retire and sell the property — and without any viable offers, they were facing the threat of shuttering their doors for good.

Saving Pollock’s: The formation of a local co-op

The result was the creation of Pollock’s Hardware Co-op, when the neighbourhood came together to maintain the presence of one of Winnipeg’s last independent hardware retailers.

“The community came together, bought it and formed a co-op,” said Blair Hamilton, board chair of Pollock’s Hardware Co-op Ltd., the group that was formed to keep the historic local hardware shop alive.

The initial co-op board started selling $25 memberships right in the neighbourhood to raise working capital. Then, with a combination of equity capital investment from members and a mortgage with Assiniboine Credit Union — thanks to a loan guarantee from the Jubilee Fund — the shop was able to re-open as Pollock’s Hardware Co-op on June 21, 2008.

The co-op initially rented the building from the previous business owners, and in 2011 they were able to purchase the property at 1407 Main Street.

A decade battling the big-box competition

Well into the era of big-box hardware stores and Amazon, Pollock’s is now looking forward to its next decade of community-based, locally-focused hardware sales, as well as celebrating a century of the iconic shop’s presence on North Main.

The neighbourhood loves the store and has relied on it for many years,” Hamilton said. “They’re one of the few neighbourhoods left that have a local hardware store. Really, the only other independent hardware store in Winnipeg is Corydon Hardware Ltd. For everyone else, it’s a trip to Rona or Home Depot.”

As it enters its second decade, Pollock’s has brought on board a new store manager who is steeped in the co-operative model. Stephen Kirk, who formerly worked at Wolseley’s Organic Planet Worker Co-op grocery store, is now managing the hardware store and over six employees.

“Stephen has a lot of experience in the co-operative sector,” Hamilton said. “He’s bringing over those retail skills and learning the hardware game. He has a real appreciation for the connection to community and the ability to relate to customers, so he’s well aligned with co-operative principles — and that’s a big part of who we are.”

We’re not just another hardware store. We do business a little bit differently and there’s an emphasis on our connection to the local community and economy. It’s a good chance for people to come in and meet the new manager, and give us their feedback or ideas about products they might like to see carried.”

Celebrating near a century in business

While there’s no formal celebration planned to mark a decade for the co-op, Hamilton said customers can expect an open house and celebratory specials over the summer. It’s really all about continuing on as a customer and community-centred store.

“We’re trying to sell a lot of hardware,” Hamilton said, laughing. In fact, the celebration is much more than sales and profits, as the group is committed to the historical significance of their business. The board is looking ahead to 2022 when the shop will celebrate a century as a hardware presence on Main Street.

Down the road, we want to see a locally-owned and democratically-operated retail presence,” Hamilton said. “Just showing an alternative way to organize the economy and meeting the North End’s hardware needs.”

The goal of the co-op

According to Hamilton, the co-op’s goals remain as they started a decade ago: promoting local ownership and control, developing and providing community leadership and building a stronger community.

While some co-operative models only allow members to shop, Pollock’s Hardware Co-op is open to all, which makes their store an inviting atmosphere.

“Our members understand our business model, as do people who are involved in the broader co-op movement or the local community economic development (CED) movement. That draws them to us, for sure,” Hamilton said.

Then there are people who live near the store and they like to get paint without having to get in the car. We want to spread the message about why this is a good business model and hopefully, it will continue to plant some seeds.”

While Pollock’s now has over 3,400 members, Hamilton and the board know the shop’s lasting viability rests on attracting a broad range of customers.

“The ideology is nice, but at the end of the day we have to be giving people what they need at a price they can afford,” he said. “Everyone loves the idea of shopping local and they’re willing to do it, but it’s a really hard thing to change their day-to-day shopping patterns. People are willing to pay a premium to support our kind of business, but the premium is not unlimited. They have to find it convenient enough that it’s the first place they’ll think of. You have to be front of mind.”

That brand recognition is an essential aspect of staying in business.

For our last fiscal year, the Main Street store pretty much had its nose above water,” he said. “Breaking even is the goal of the co-op. We’re not in it to make a lot of profit, even if it were possible. We realize it’s a tough retail environment all the time, but particularly now with Amazon, Lee Valley Tools and now Lowe’s coming to town. We want to be viable and continue to differentiate ourselves in the marketplace — and we think the co-op identity has a lot to do with that.”

Pollock’s Hardware Co-op focuses on quality service, which has become a significant part of their value proposition. Customers are also attracted to the unique hardware and houseware products — including items ranging from Altona-made crokinole boards and clothes-drying racks to Raber ‘garbage’ mitts.

We carry a fair bit of locally produced product, and we have an emphasis on ‘green’ solutions,” Hamilton said. “We’d much rather sell you a snake to clear a drain clog than a caustic chemical. We bring in some old-time products like the Watkins line.”

Members have appreciated this approach to products and service. “Partly, it’s about people seeing familiar faces when they come through the door — they get to know the staff. It’s a combination of nostalgic, kind of off-beat products with a principled approach to business and attention to personal service — that’s how we try to distinguish ourselves.”

Hamilton said Pollock’s Hardware Co-op will continue its work to support other organizations in the co-op and non-profit sector.

“It’s an area we’re looking to grow,” Hamilton said. “We continue to do business with Manitoba Green Retrofit and BUILD (Building Urban Industries for Local Development), who are two of our social enterprise partners.”

Up Next: Have you visited the new canopy at Le Marché St. Norbert Farmers’ Market yet? Find out how they are celebrating 30 years in the community.