Home Blog No car? No problem! You can join the Peg City Car Co-op

No car? No problem! You can join the Peg City Car Co-op 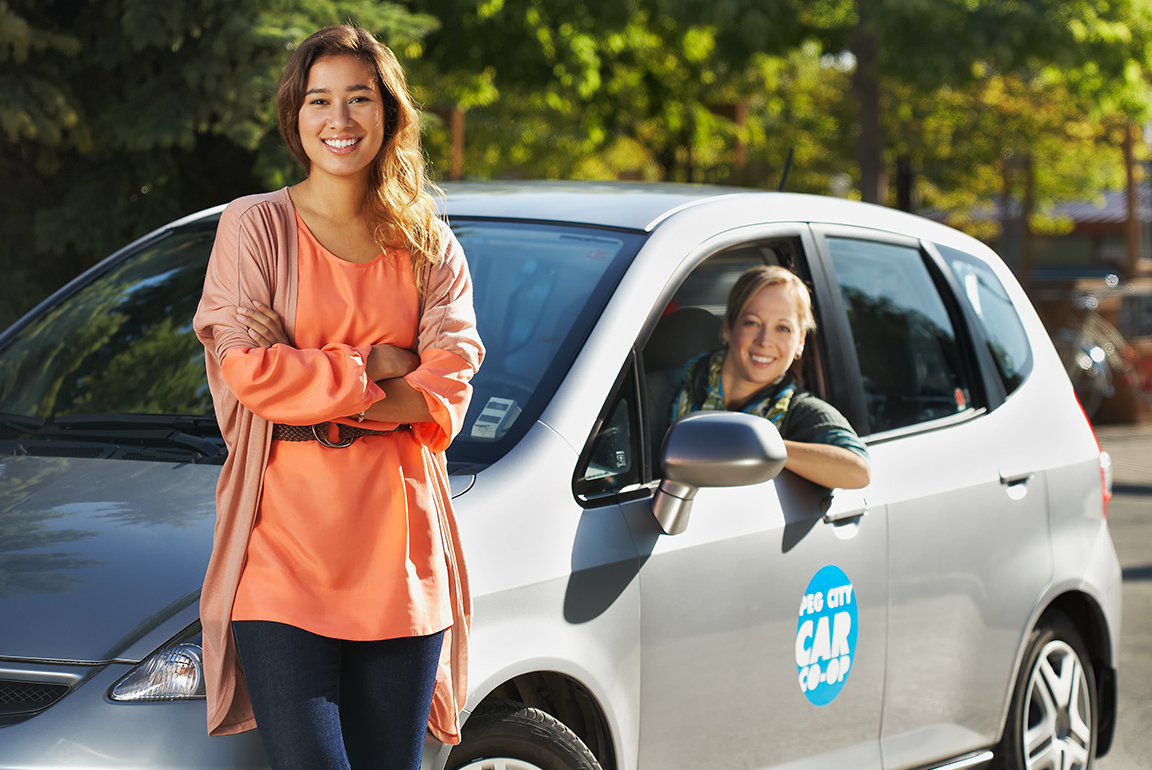 If someone told you that by putting one more car on the road, you would help remove between 13 and 15 other cars, how would you react? If you’re Philip Mikulec, you’d probably have a big smile. Then he’d point out that he leads a company that has already effectively removed 500 cars from our streets.

Mikulec is the Operations Manager of Peg City Car Co-op, and he lives and breathes the philosophy behind the local company; to provide an affordable, convenient transportation option for everyone, while supporting community transit and environmental goals.

The largest contributor to greenhouse gas (GHG) emissions in Manitoba is transportation, which represents nearly half of the personal emissions for households.

“People who use a car co-op not only sell their own cars, they change how they use cars, and how often. That can lead to as much as a 60% drop in transportation emissions by those individuals,” said Mikulec. “That has a profound impact on everything from pollution to parking.” And that’s something very attractive to Assiniboine Credit Union.

Society is changing its love affair with the car, with younger generations not as eager to own one. The ever-increasing cost to buy and run a vehicle, the insurance, plus finding and paying for parking, means that for many, ownership is becoming less and less attractive. That’s where the sharing of cars comes in. It’s one way to still have access to a car, but only when you need it. Members of the co-op pick up a car from designated spots around the city, use it, and then return it, leaving it for another member to use.

Peg City Car Co-op is member-owned and driven. There are now over 1,600 members in the co-op ranging in age from 18 to 70. It started in 2011 with just three cars. In five years, that number grew to 23 cars. It currently has 43 vehicles on the road and in 2020 it will increase that number to almost 60. ACU provides financing for cars purchased by the co-op, playing an integral role in the success of the local company.

“ACU has been great. They are very much involved in our car financing and they work very hard to put the deals together,” said Mikulec. “Without them, it just wouldn’t work.”

To join the co-op, members buy a $500 share, which is returned if they leave. Then, they pay a monthly membership fee, plus an hourly and kilometer fee. There are different levels of memberships available for individuals, companies, and non-profit organizations. The co-op has raised over $300,000 in memberships and over $600,000 through investor share offerings, where investors receive a 45% community economic development tax credit from the provincial government.

Mikulec himself, does not own a car. He’s an avid cyclist and he’s a firm believer that every city should have a diverse transportation model. With a degree in city planning, he takes a much broader view of the issues facing modern cities. He believes there is a place for cars, pedestrians, public transit, bikes, taxis, ride-share companies, and yes, car co-ops too.

According to Mikulec, the City of Winnipeg has been great to work with and very supportive, especially with infill development projects. “When an apartment is built, the developer must create a certain number of parking spots for each unit. When the dwelling is an infill project, that parking requirement is drastically reduced due to the presence of companies like us. This attracts more in-fill development, which is great for the city,” he adds.

Although car co-ops can be found throughout Canada and around the world, Peg City is an independent company modeled after a similar Vancouver co-op, Modo. Peg City plans to expand the number of pick up and parking stations into neighbourhoods in the North and West End areas of the city to serve more members, and increase their social and environmental impact. ACU plans to be there every step of the way, working together to strengthen local economies, create opportunities for people in our communities, and build business models committed to environmental leadership.

To learn more, or to set up a membership, visit pegcitycarcoop.ca