Opportunities for Employment: A new approach to matching job seekers with local businesses 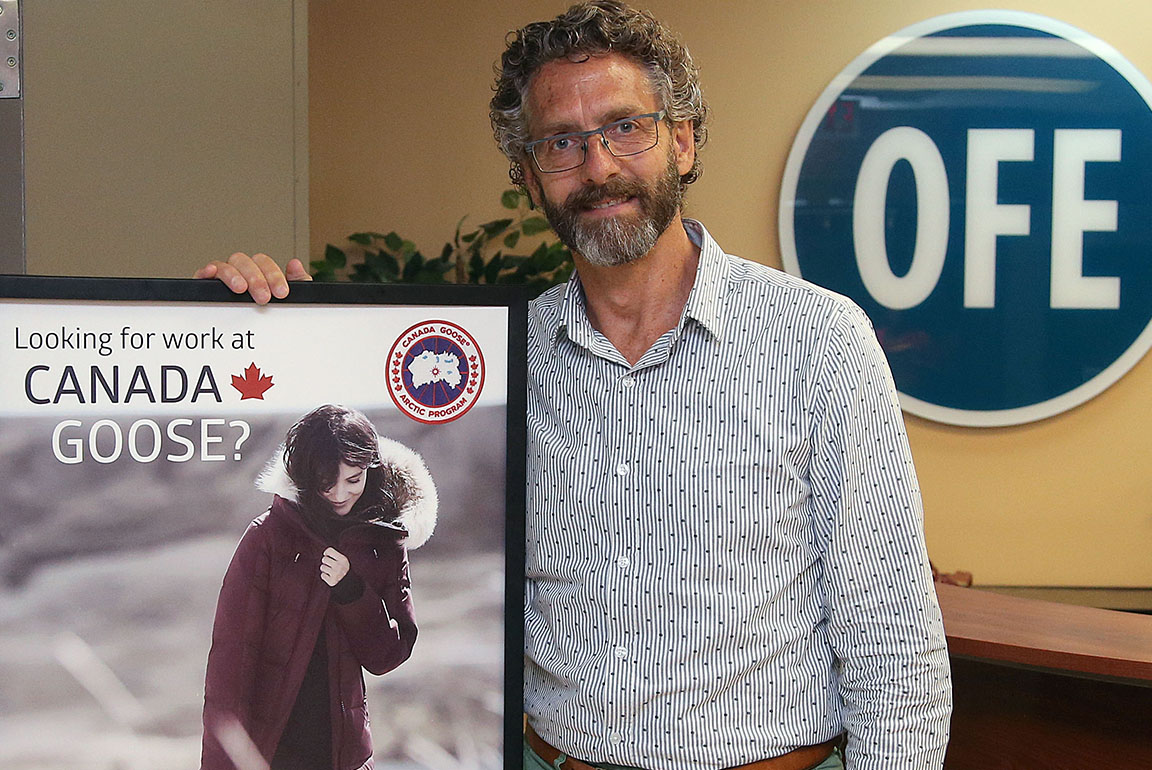 The motto for Winnipeg employment agency Opportunities for Employment is “Get Ready, Get Hired” — and this is accomplished with the process of “Assess, Equip and Connect.” It’s this last word in the phrase that truly sets the organization apart.

Founded over 20 years ago by local social agencies and entrepreneurs, including the owners of Palliser Furniture, the not-for-profit agency has always taken a market-driven, business focus to connect job seekers and employers.

But rather than stick to more traditional employment agency principles, Opportunities For Employment (OFE) has found success with a new approach.

According to OFE Executive Director, Shawn Mahoney, it’s all about adopting a pinpoint approach, instead of the more traditional scattershot method. This strategy, he says, benefits both parties in the employment equation.

“It’s about working with employers rather than simply preparing people with a résumé and telling them to go look for work,” explains Shawn, who has been with OFE for 14 years.

For certain kinds of jobs, that traditional process is imperative, don’t get me wrong,” he clarifies further. “But for the average worker out there, we need to better understand the needs of employers and the opportunities available to our participants. Then it’s about marrying the two as efficiently as possible.”

Established in 1996, OFE has found employment for about 22,000 people. Much has changed since Shawn came on board over a decade ago. “In my 14 years, we went from one contract with one government department, helping people on social assistance, to where we now have 11 contracts and six different funders,” he said.

They’ve also improved efficiency since the organization was founded. In the first 10 years, their placement rate was 441 people per year. Last year, that had grown significantly to over 2,200 people. Almost more impressively, that 500 per cent increase was accomplished while decreasing the cost of a basic placement by 64 per cent.

Building skills free of charge: “Get Ready, Get Hired”

The organization has always grown and adapted to the changing needs of Winnipeg’s labour market. But it’s also become a leader in research and innovation in the employment development sector. And although OFE does a bit of advertising, word of mouth has played a significant role in making them known within the community.

Participants can be referred by social service agencies, but any Winnipegger over 18 can access individualized employment services at OFE — free of charge. At any one time, the organization has about 500 people looking for work and connecting with prospective employers.

New participants first complete a computerized assessment providing 180 points of data about themselves. This information provides a rich database of information that informs the continual moulding, shaping and improving of programs offered. They then receive introductory information from an employment services advisor, followed by an appointment with an employment consultant who creates their personal and unique employment development plan.

After the employment development plan phase, participants can start equipping themselves for the labour market by accessing courses to build life skills, employability skills and computer proficiency — also all free of charge.

Beyond these services are more tailored learning opportunities.

In addition to serving the rapidly increasing demographic of new Canadians and refugees in the city, OFE is focused on what the organization sees as an overlooked segment of the labour market.

It’s made up of people who are chronically underemployed, undereducated and have not experienced success,” Shawn explains. For this portion of society, the prospect of applying for a job can bring about feelings of apprehension and impending rejection, which can contribute to less positive outcomes.

OFE maintains that these participants need to be paired with the right job, and that’s where the ‘connect’ part of the equation comes in.

This is part of the reason why OFE has adopted a demand-led approach when connecting with local employers. By ensuring that they thoroughly understand the types of jobs they need filled and what it will take to fill them, they’ve found that these employers are very interested in working with them.

“It’s a game changer and it has made a significant difference to this demographic,” Shawn says.

Connecting through a new approach: No resume needed

When it comes to connecting job searchers with prospective employers, OFE’s strategies go well beyond job fairs — including weekly employer forums, workplace tours and industry-specific presentations. They strive to develop relationships with employers in order to get a better picture of the kinds of jobs available before presenting them to OFE participants.

And when participants are interested, they can get a closer look at those jobs. OFE offers its clients first-hand exposure with tours of the businesses to which they can be trained for. Being able to see what the job is like and meeting potential co-workers and supervisors is a huge motivating factor for the participants — and is an entirely different approach from more traditional employment agencies.

We’re actually creating a new way of doing things. I believe we need to get out of our offices and connect with employers so that we can prepare people for meaningful work by better understanding the employer’s needs first,” Shawn explains.

OFE’s partnership strategy helps place people in much-needed jobs, but also works to grow the businesses they connect with. “You have companies who are trying to grow who can’t find people, but you also have people who don’t know the jobs exist. There’s such a disconnect there.”

For example, OFE has worked with high-end parka manufacturer Canada Goose for several years, placing 500 people in employment positions in the past two years — without any résumés being submitted or applications filled out.

In our business, that’s revolutionary,” Shawn says. “We’ve come to the point where we’ve asked if the concept of an application and a cover letter is antiquated and obsolete for this sector of society.”

According to Shawn, most human resources companies would beg to differ, but OFE holds a different perspective. “If we can identify in-demand jobs that we can train you for in advance, why would you have to apply… if an agency has that kind of relationship with an employer and understanding of their needs?”

Shawn said OFE has developed this unique connection with a number of employers and the model is drawing attention from other provinces and the federal government. “It hasn’t been done to this kind of scale or from the same perspective.”

OFE has also been adapting to another changing demographic in Manitoba’s labour market. New Canadians now make up more than half of the employment agency’s clientele, more than doubling over the last five years.

Last year, OFE partnered with the Manitoba Institute of Trades and Technology (MITT) and they also joined forces on the Manufacturing Production Worker Program as part of the provincially funded and award-winning Refugee Employment Development Initiative (REDI). The program works to prepare refugees with a Canadian Language Benchmark of three or less, to transition into long-term, full-time employment in the province’s manufacturing sector.

The project has been a huge success and the results have been amazing,” Shawn says. In this model, learners take part in occupation-specific essential skills and also language training to help meet the needs of each position.

Moving forward, OFE will continue to support underserved segments of the labour market and the needs of new Canadians. The social agency will also continue to grow its partnerships with employers, including an expansion of its affiliation with Canada Goose, working to fill another 500 positions for the company’s third Winnipeg factory.

Business principles combined with a sense of community: “Lives changed with meaningful employment”

From the beginning, OFE has been operated like a business. While they access funding from the provincial government, they also receive some corporate support. Mahoney said the non-profit organization still aims for ‘profits,’ but in its own sense of the word.

“We were founded by the owners of Palliser Furniture as an entrepreneurial approach to helping people on social assistance. Our board of directors is made up of business people,” explains Shawn, who previously worked in the corporate world in the plastics manufacturing sector. “We believe in business principles and OFE is run accordingly. I often say we’re going to make more profit this year than last, but the difference is, my profit is no longer percentage points to shareholders. My profits now are lives changed with meaningful employment.”

That community-minded mission and values strike a chord with many community members and partners, including Assiniboine Credit Union.

We have a wonderful working relationship with ACU, and all of our funding flows through the credit union,” Shawn describes. “With government contracts, there’s always a holdback at the end of the year until the cash flows are reconciled, meaning we need lines of credit for a couple months. The processes are put in place incredibly efficiently and they’re wonderful people to work with.”

“There have also been a number of occasions where ACU has offered grants to us to take care of very specific needs in the operation. They’ve always been quick to the table,” he adds, crediting a shared philosophy for the strong relationship between OFE and ACU.

“I think ACU really appreciates the style in which we work because they’re a business, but they’re also very community-minded,” he says. “They want to do business well to help build the community and I think they appreciate the fact that we do the same.”