Home Blog Perseverance pays off for this local entrepreneur

Perseverance pays off for this local entrepreneur 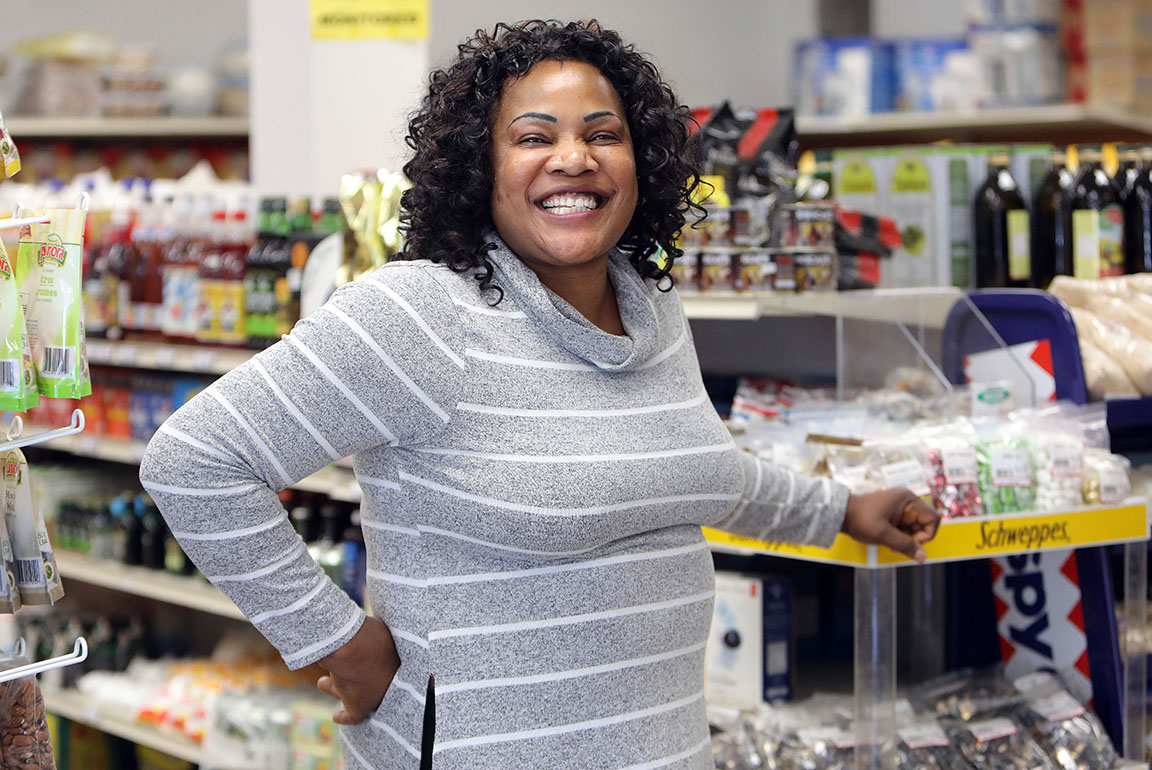 When she emigrated from her native Nigeria to Canada in 1986 to join her Nigerian-Canadian husband, Elizabeth Lawal had limited English language skills and knew it would be tough to establish herself — but it was a challenge she was up for. Overcoming adversity and life’s most difficult and unexpected challenges, this local entrepreneur forged ahead to establish a remarkable business that continues to flourish.

When you factor in the tragedy of her 25-year-old son Akin’s sudden death in 2012 and the hard work she had to put in to regain her financial footing after a divorce in 2002, you gain a better understanding of the deep pride Elizabeth Lawal takes in her business. With an entrepreneurial spirit and vision, she developed a business idea into a million-dollar-plus annual grossing grocery/beauty supply store, employment agency and real estate business — Akin’s International Foods.

Striving to put her stamp on the business world, Elizabeth also needed to find her place in the city she now calls home. “This is my own,” Elizabeth said of the store, which is located in Winnipeg’s West End neighbourhood.

Expanding into new ventures, Elizabeth has grown an impressive range of business ventures, including an employment agency and rental properties, with plans to open a West African restaurant down the street from her grocery store.

This entrepreneur’s success is a sign of her hard work and persistence, but it was a long journey to get there.

Overcoming financial adversity to run her own business

Before venturing out on her own, Elizabeth worked just about any job she could find. She was a Unicity taxi-driver, unloaded trucks at Woolco department store, did sewing, cleaning and caring for the elderly, as well as working as a health-care aide.

With her eye set on a property, in 2000, she had saved up enough funds to buy the Stella International grocery store on Ellice Avenue. Then in 2002, the divorce happened and the store was at stake. Wanting to keep the grocery store, she bought her husband out of their Winnipeg house mortgage, while he kept their home in Africa. With the store now fully in her hands, she was faced with an inventory crisis.

“There was nothing in the store because I didn’t have the cash flow to do anything,” she said.

That was when Elizabeth first connected with Assiniboine Credit Union. She recalls walking into the West Broadway branch and breaking down crying.

While Elizabeth had decent equity, in the fallout of the divorce she no longer had sufficient income to be eligible for the home’s mortgage, and business financing was definitely out of the question. But she said ACU helped her consolidate her debt and gave her valuable guidance on how to move forward financially, working towards meeting ACU’s requirements for business financing.

They made me,” she said of ACU. “They’re not just about your credit. They look at the ability, the potential of the person. Along with the help and support of my husband, Dr. Lawal, I have made it through.”

Building credit to get ahead

We helped Elizabeth with some basic banking needs at that time, but she was also running businesses. So we took some time to get prepared and outline the financial record keeping she would need for her future plans,” he said. “She asked me questions about what she would need to do to get ready for business borrowing, and I started coaching her in towards that.”

As she rebuilt her credit, Elizabeth did all she could to keep her store going and, in time, even managed to build on this base.

“I just worked any job I could do,” she recalled. “I was building the store, working nights, cleaning people’s houses and doing everything I needed to do.”

In addition to learning English on her own with the help of audiocassettes, Elizabeth also acquired a health-care aide certificate and a diploma in business administration from Red River College.

In 2006, Elizabeth moved her store’s location. She connected with a property owner on a vendor-financed deal to acquire a three-unit property on Sargent Avenue. Continuing to work numerous jobs and renting out the other two units at the property, Elizabeth was able to fund the venture.

Persistence paid off, and by 2014 Elizabeth said she was back on her feet financially. She was soon able to partner with ACU on a whole new level and work at acquiring the current Sargent location of her grocery store while still holding on to the first property. Akin’s International Foods moved into the space in 2015, eventually growing to a staff of seven.

At that point, Jeffrey had joined ACU’s Community Financial Centre, and became involved in the new chapter of Elizabeth’s business life.

Once the Sargent property was paid off, Elizabeth had the collateral to go forward with the type of business financing she was looking at, which was mostly working-capital financing,” Jeffrey explained. “Elizabeth is a driven and motivated person. If she has a goal she sets her sights on, I don’t think there’s a force in this world that would stop her achieving it.”

What it takes to be a successful entrepreneur

Elizabeth says her success comes down to hard work, self-belief in the face of adversity and financial advice from professionals who could see beyond the bottom line.

It’s about more than numbers,” she said. “I appreciate the faith that Assiniboine Credit Union had with me — encouraging me and treating me like a part of a family. ACU is more than just a bank.”

For Jeffrey, it was apparent that Elizabeth’s planning and perseverance were major benefits, and these are important qualities for anyone starting a business.

“Part of it is having an understanding of where you’re at and where you need to go,” he said. “It can sound clichéd, but you have to have a goal — and Elizabeth always had one.”

Both Jeffrey and Elizabeth say that goal was business independence.

“She wanted the freedom to do it herself,” he said. “She was willing to accept help here and there where she needed it, and that empowered her. She didn’t want to just hire someone to do things, she wanted to learn so she’d have a good understanding of how everything works.”

Finding the perfect products for her community

With the help of her husband Dr. Lawal, Elizabeth’s shop is now located in the 7,000-square-foot space of the former La Grotta grocery at 550 Sargent Avenue. Akin’s International Foods specializes in West African and Caribbean groceries, fresh meat, cheese, deli meats, beauty supplies, clothing and many other exclusive products. Along with a hair salon, the business has become a hub for African newcomers in the city.

“It’s a way to help connect the neighbourhood,” she said of the store, which also continues to stock many of the Italian, Portuguese and Greek foods that La Grotta offered.

It’s a good community,” she said. “This store isn’t just about West Africa — it’s about the Portuguese, Greek and Italian communities. La Grotta had been here since the 1970s. People still want it.”

Jeffrey applauded her business plan. “They had a strong, built-in clientele — it was very smart to keep those parts of the business and diversify,” he said.

With two daughters and twin boys with her husband, Elizabeth knew the importance of building a lasting business.

“I came here to build myself,” she said. “I wanted to make a difference. Canada gave me what I want in my life. If you want it and work hard here, you will get it.”

Based on her own story, Elizabeth has advice for fellow newcomers.

Let your word be good,” she said. “Be consistent and don’t listen to people when they say things are too hard and you won’t succeed. Believe in yourself.”

Jeffrey also praised Elizabeth for her willingness to seek advice early on.

“Because we started the conversation so early, she had lots of time,” he said. “When costs or delays happened, they weren’t a material issue because she allowed herself enough time in planning the goals. If you have the will and the desire to meet these goals, then we’re here to help you along the way with that. At the end of the day, our success is our members’ success.”

Reflecting on her success and with a strong vision for continued success, Elizabeth ended with kind words, saying, “Thank you so much Assiniboine Credit Union!”