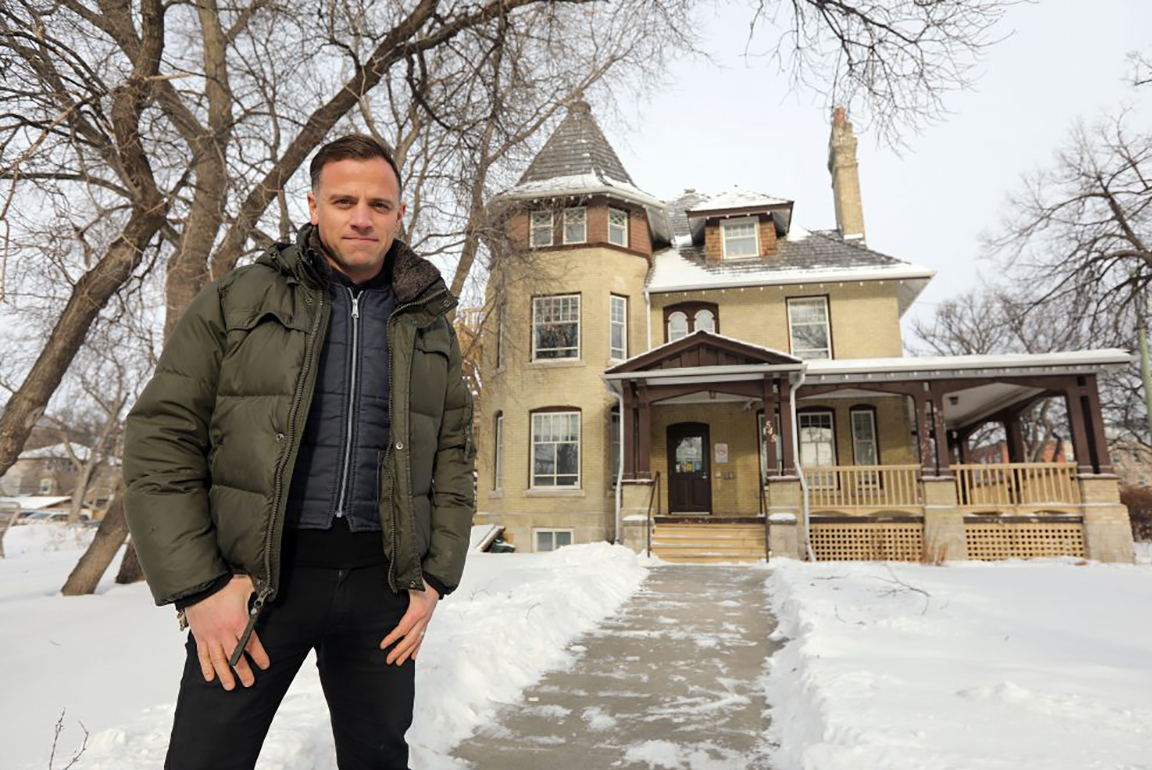 A West Broadway neighbourhood renewal group is breathing new life into one of the neighbourhood’s landmark properties — the historic Wilson House in Winnipeg, with its wraparound porch and defining turn-of-the-century turret.

The West Broadway Community Organization (WBCO) has moved into its new home at the historic Wilson House at 545 Broadway, a heritage property it purchased late last year from Klinic Community Health. Klinic recently vacated the property after more than a decade to consolidate its operations in the former Epic Information Solutions building it acquired recently on Sherbrook Street. Now, this three-storey architectural landmark, designed by local architect J.H.G. Russell, will continue its rich history in the city.

Celebrating its 20th year, the WBCO is a non-profit, charitable organization involved in many aspects of the West Broadway community, including social and economic development and housing. This move allows the organization to develop further initiatives and help support other groups in the surrounding area.

The purchase of the building also helps bring the WBCO full circle. Their roots grew in community activism when neighbourhood volunteers came together as the West Broadway Alliance in the 1990s to keep up the Wilson House, which was vacant at the time.

“We’ve had a long history with this building over the years,” said Greg MacPherson, Executive Director of the West Broadway Community Organization. “The West Broadway Alliance that preceded us, they galvanized a lot of their efforts around preserving this building and beautifying the neighbourhood, by doing things like cutting the grass and painting the boarded-up windows.”

The WBCO has also been operating a community garden at Wilson House site for years, so when Klinic decided to sell the property, MacPherson said he and his organization immediately jumped at the opportunity. The initial idea was to establish a new home for one of the WBCO’s partners, Agape Table, which runs emergency and low-cost meal and grocery programs.

Operating out of an adjacent hall in nearby All Saints Anglican Church, Agape is losing its home due to structural issues. However, in the end, Wilson House didn’t prove a good fit for the organization. That’s when the WCBO looked at other options for the space.

Keeping the building “in the neighbourhood”

Having challenges with their previous location on Broadway, the WBCO decided to move into Wilson House themselves. “We struggled to get people’s attention (at the former location). We painted the house bright green, because people would just walk by,” MacPherson explained.

In contrast, the Wilson House could provide a more prominent location for WBCO’s future, and it was important to have the organization spread their roots in the area. “Klinic looked at this as an opportunity to keep the building in the neighbourhood, so to speak,” MacPherson said. “The new location is very high-profile — it’s the entrance to this neighbourhood.”

“We’ve retained access to this garden space, which is important for us. Greenspace management and development is a big part of our mandate. It checks a lot of boxes for us an organization, and was a good move for us.”

To purchase the new space, the organization sold their old Broadway location. They have also been working with Assiniboine Credit Union and its Community Financial Centre for years, so they knew where to turn for financial help on acquiring the property. MacPherson said ACU is a natural fit for WBCO, with the financial institution’s focus on community-building.

“They’ve been a really good partner for us for years,” MacPherson said. “They’re very present in the community here and they really understand how non-profits work. They’ve always tried their best to support us through difficult times.”

Plans for the new space

The WBCO will occupy the second and third floors of Wilson House, while the West Broadway Business Improvement Zone and a non-profit financial management service will also be in the building. Providing even more community benefit, the large second-floor meeting room space will be shared with other organizations and agencies in the neighbourhood, and they are also looking for other tenants to complete the occupancy.

The move also allows a business to occupy their former location, which is classified as commercial space. “Selling our former space to a business is a success. This is going to be a really nice shot in the arm for the area. It reduces vacancy, it gets a business in here, and it’s a mix of uses.”

“The heritage component is a big part, too, and I think we’ll be good managers of this important landmark building,” MacPherson said. Just the fact we’ll be so visible on the street is really helpful for us and for the neighbourhood, and the idea that community economic development can happen here more easily.”

The WBCO partners with many area groups and runs numerous programs, the biggest of which is the Good Food Club. Focused on food security issues, volunteer training, socialization and community development, the club now has about 1,100 members and hundreds of volunteers who are involved in programming.

The WBCO champions the neighbourhood while working to constantly improve it for residents, organizations and businesses that call the area home.

In addition to helping Agape Table find a new space, the WBCO is currently working on a couple of new projects, including a neighbourhood snow-removal initiative involving Gordon Bell High School students and a plan to boost safety in the area.

“We have a renewed focus on safety issues, so we’re working with the Bear Clan Patrol right now to try and launch a local chapter, so we’re pretty excited about that,” MacPherson said.