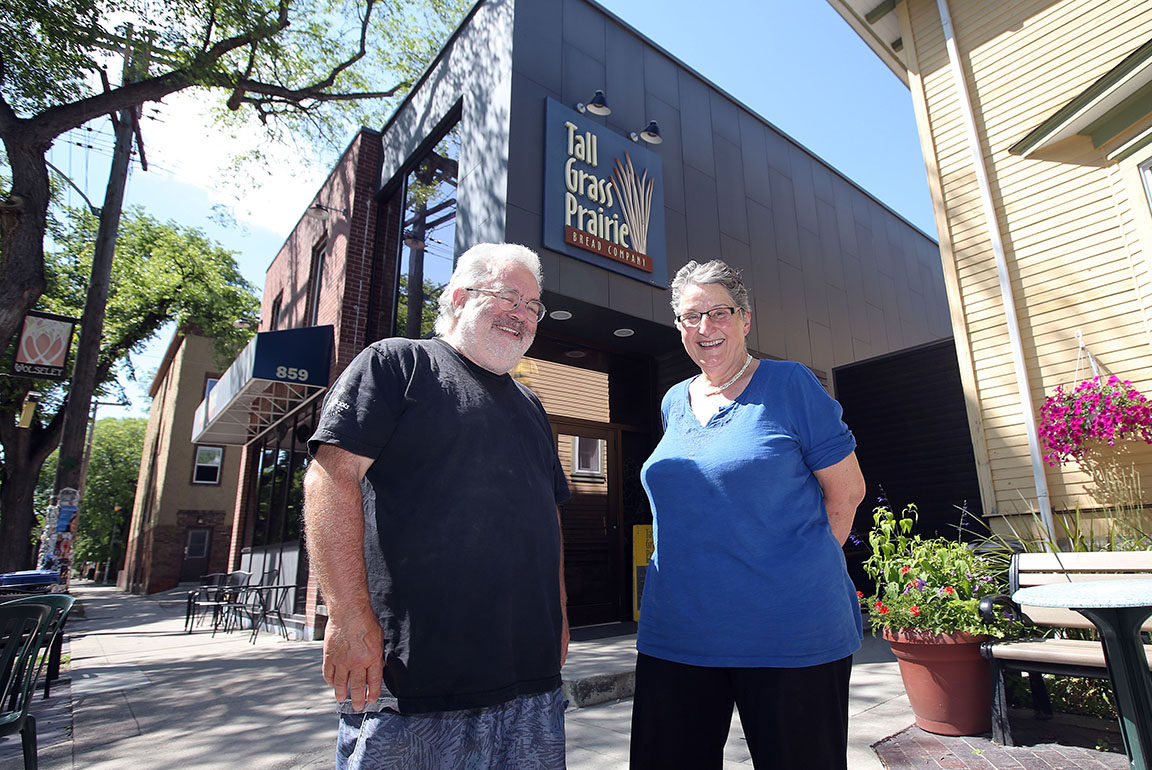 This locally famous bakery is all about grassroots, gives a better economic share to farmers and provides a living wage to employees.

Most Manitobans have seen the jaw-dropping displays of prairie tall grasses —showing roots that grow even deeper than the grasses reach high. This plant is almost the perfect analogy for the Winnipeg bakery that shares the same name — a business that has planted deep roots in our community and is an iconic symbol for local, ethical (and incredibly tasty) baked goods.

Tall Grass Prairie Bread Company opened in 1990 with two employees and 30 loaves, and has stuck with its founding philosophy — to support local organic farms and the community. This ethic was established well before it became a common business practice. Now, the operation is up to 350 bread loaves a day, not to mention 600 cinnamon buns at each site on Saturdays, 50 staff members and three locations — the original Westminster Street bakery, a bakery at The Forks Market and Grass Roots Prairie Kitchen, also at The Forks.

To call the company’s start ‘grassroots’ is an understatement. Its origins actually began five years earlier as a Wolseley bread co-op in the basement of St. Margaret’s Anglican Church and on the front porch of co-owner Tabitha Langel’s nearby home, where flour was milled from local grain.

It was an introduction to how much better bread tastes made from freshly-ground flour,” says Tabitha. “I think that’s one of the things that gives Tall Grass an edge.” Along with co-founders Tabitha Langel and Lyle Barkman, Tabitha’s husband Paul Langel and French baker Loïc Perrot now make up the ownership group of Tall Grass.

“Respecting in the circle”

From the start, Tall Grass has been based on a philosophy of giving local organic farmers a fairer economic share of what comes out of their hard work on the land and a living wage to those working at the bakery.

“It’s ‘respecting in the circle’ — the earth, the farmer, the staff and the customer,” Tabitha explains. Those ideals were repaid when community investment helped Tall Grass raise about $40,000 to establish its first shop.

It was crowd-sourcing before that term existed,” Tabitha says of the low or no-interest loans. The business model of paying farmers a larger percentage didn’t appeal to banks at the time. “People in the community said yes (to that model), and thought we should try.”

She adds that their business helps support at least five local farm families. “One of the gifts we got along the way was of understanding ourselves, because we always had enough money, but not a lot left over. When we started, it was an adventure and a social experiment. Now it continues to feel right and good.”

Becoming established at The Forks has allowed Tall Grass a more visible opportunity to showcase its philosophy. Customers there have a chance to interact with farmers making regular deliveries of oats, flax and millet, building real connections. “Customers get to know them and that’s great,” she says.

Contributing to a movement: Sourcing locally and ethically

Tall Grass continues to stone-grind its own flour. “Milling was the only way we could pay farmers what we do,” she says. “We couldn’t make it if we bought ground flour and we also wouldn’t have been able to build the personal connections.”

Tall Grass makes every effort to buy locally and organically. About 75 per cent of ingredients originate within 300 kilometres. Products not available here, such as coffee, are always sourced carefully, based on philosophy and ethical practice.

While sourcing local, organic produce was harder to do back in the ‘90s, increased demand has made it easier. Similarly, the buying public has caught up to the Tall Grass ethic, which Tabitha feels is also due to the influence of younger generations and the fact that some of the best cooking schools in Canada have stressed a preference for organic and local.

Many bakers who apprenticed or worked at Tall Grass are now involved with the new ‘from-scratch’ bakeries. “I’m excited for all the young businesses and it’s wonderful. I think it indicates a healthy society.”

Tall Grass has taken dietary trends like ‘gluten-free’ and ‘low-carbohydrate’ in stride.

In response, they’ve decided to keep doing what they do. “Our response is to honour the grains and to keep believing that complex, whole grains are the carbs we should be moving towards as a culture,” Tabitha says.

Tall Grass regularly uses flour from older grains like spelt and Red Fife, and is exploring use of Kernza, a perennial grain being researched for its ability to boost crop sustainability. Last spring, Tall Grass was supplied with Kernza from test fields, so they naturally ground it and made bread, which was then sold with proceeds contributed to the research effort.

It has a fantastic flavour,” Tabitha said. “The first impression when I opened the oven door was lying back in the grass when I was young. It had a nutty, grassy, fabulous flavour.”

While Tall Grass operated a sunflower seed oil press at Grass Roots Prairie Kitchen for years, they recently sold it to Plough shares Community Farm near Beausejour, allowing the farm to add value to its own harvest. Tall Grass now buys organic fresh-pressed sunflower oil from the operation.

In 2016, Tall Grass added a stone-decked oven at its Westminster bakery with the help of ACU. This oven features a steam option that heats up to 550F and has allowed co-owner Loic Perrot — a French master baker from Brittany — to create the crusty Desem bread line from Europe. The customers love it.

The bread is fabulous and our customers are recognizing it,” says co-owner Lyle Barkman. The new oven has also allowed Tall Grass in Wolseley to add a popular lunch pizza special several days a week.

“Assiniboine Credit Union worked with Tall Grass to finance the oven. “We conferred with ACU and agreed that we’d lease the oven,” Tabitha said. “They worked with us throughout the process.”

As a long-time ACU member, Tabitha feels the Wolseley location’s major renovation in 2009 was only possible thanks to a $200,000 ACU loan, guaranteed by the Jubilee Fund.

“One of the things ACU did that we really found valuable was viewing us as a social enterprise,” Tabitha says. “That has been very helpful in making sense of us, because we really don’t have the profit model of other businesses. While being profitable is important to Tall Grass it is not the only motivator. Working with ACU with this in mind has been a tremendous joy.”