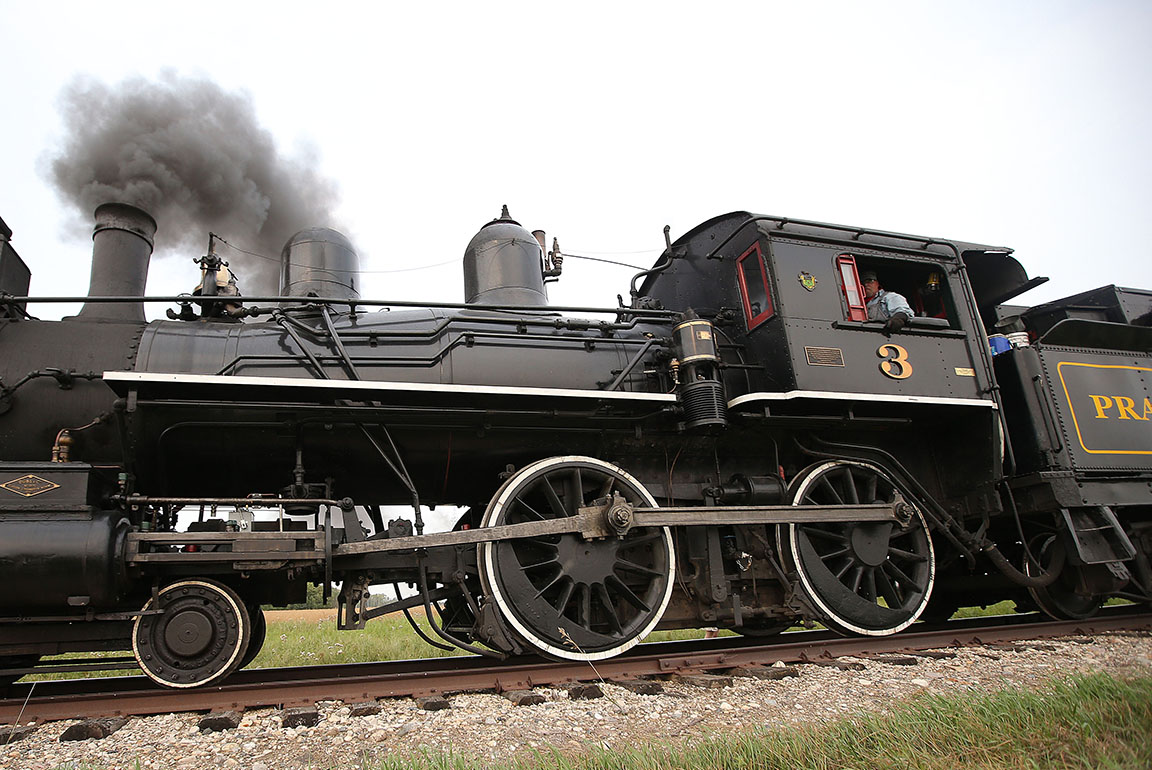 It’s full steam ahead as the Prairie Dog Central Railway rolls past a half-century of operations. As Manitoba’s only vintage railway, this organization overcame unexpected impasses to develop a creative business operation that delights passengers young and old. Here’s how they did it…

Over five decades, it seems no challenge was too big for Prairie Dog Central. From being forced to acquire their own section of train track to completely rebuilding the boiler of their popular vintage steam locomotive, the hard work paid off. Now, after launching a successful commercial enterprise in 2012, the Prairie Dog Central (PDC) Railway has put popular theme trips in the spotlight.

The story all started when the Vintage Locomotive Society (VLS) was formed in 1968. As a registered charity and volunteer organization, its members came together to operate the PDC Railway, with a mission of providing a memorable and informative historical railway experience.

We have much to be thankful for, and 50 active years is something we can all be proud of,” says Paul Newsome, General Manager of the VLS. Having been with the VLS for 48 of those years, Paul brought great industry experience to the table, having worked as a brakeman with Canadian National Railway and in the VIA Rail administration. Yet along the way, the tracks weren’t always clear.

“During our darkest moments when we really didn’t know if we would or could survive, our ‘let’s-not-give-up’ way of thinking and the pulling-together attitude instinctively took over,” he said.

Such was the case with their famous No. 3 steam locomotive, which was built in 1882 and originally run by Winnipeg Hydro. As the oldest operating steam engine in Canada, it was in desperate need of repair — and would take countless hours to get it back up and operational.

The aim was to get No. 3 running for Manitoba’s centennial, and on July 1, 1970, it carried Prime Minister Pierre Trudeau and members of the Manitoba Legislature to Lower Fort Garry. Just 10 days later, PDC’s regular operations commenced.

In those first couple of decades, the VLS was focused on survival, renting space from CN Railway to store and maintain the train. But the Board was concerned they’d one day be required to go independent as a short-line railway.

That came to pass in 1996 when CN’s business needs changed and the Oak Point Subdivision became surplus. In response, VLS raised funds to purchase a portion of the Oak Point line and establish a new base of operations (which it uses to this day).

Then in 2002, just as they were picking up steam, the beloved No. 3 locomotive went out of service. For the next seven years, VLS was forced to completely rebuild its engine, which would lead to new challenges.

Following our relocation to Inkster Junction and becoming a short-line railway, we found ourselves struggling to stay alive financially,” Paul says. “Had things not evolved, the train would have ceased operating. The reason we were able to survive was the establishment of our commercial operation.”

That business was Prairie Rail Solutions, which began providing limited car storage space for commercial railways in 2012. The venture would be an economic saviour, allowing the organization to cover any PDC operating losses.

As for the Prairie Dog Central, the experience flourished into a popular tourist attraction — developing a strong ridership that would nearly fill their 300-seat train voyages. In 2018 alone, over 11,000 riders boarded for 40 events.

While the show-stopping No. 3 has remained a big draw of the PDC, the group knew it had much more to entertain audiences in addition to the famous turn-of-the-century train.

About two-thirds of our passengers are local with the other third from elsewhere in Canada, the U.S. or other parts of the globe,” Paul says. “We started to grow the events, and a lot of it has to do with listening to passengers.”

Theme trips became the answer, and in addition to Halloween fun and hugely popular Fall Supper rides, their Great Train Robbery outings have been big draws.

“It’s done at a predetermined spot and it’s all about safety,” Paul says. “We bring the train to a stop and bandits get on to ‘rob’ passengers by passing the hat. Then we donate all the money to local charity.”

Over the past couple of seasons, proceeds have gone to Helping Hands for Manitobans With Breast Cancer Inc. Previously, funds have gone to Jocelyn House, Osborne House (Willow Place), the Winnipeg Christmas Cheer Board and Winnipeg Harvest.

What’s down the line?

Now on stable tracks, the PDC is in a position to plan ahead by making the most of their other three diesel locomotives, along with five train cars dating from 1901 to 1912 and its caboose, built in 1912. They also recently acquired two steam locomotives from the U.S. — both former CP engines of the same 1940s model. The group is studying options for these locomotives.

We’re trying to acquire a second train set,” Paul says, which would enable the PDC to run winter trips without exposing vintage cars to undue wear. “It would be used for Santa trains, which were very popular in the past, and perhaps even a Valentine’s Day special.”

To complement the on-track experience, the VLS is looking into developing a heritage venue which would complement both the train rider and the work that has been done at Grosse Isle with the installation of heritage buildings.

Being a positive part of the community has been intrinsic to the PDC — for example, providing a boost to Grosse Isle, the community northwest of Winnipeg where the train turns around. A heritage site has been developed and the stop area also features a sheltered space for dining, vendors and entertainment. As well, a stationary caboose hosts an informational display about Manitoba’s tallgrass prairie.

With a forward focus to keep the history of train travel in western Canada alive, the impact can be felt beyond one town. “The line we’re on was built in 1905,” Paul says. “And although the PDC is a fictitious railway, it represents what went on in hundreds of communities across the Prairies.”

As for their future economic position, they are also in a much stronger position. “I believe ACU has an excellent understanding about what we’re all about,” Paul says, noting that the VLS has had a strong, decade-long relationship with Assiniboine Credit Union. “We’re very happy with ACU because they’re a local organization, like us. And because of what we’ve done to stand on our own financially, I think they’re very happy to be involved with us.”

No doubt, tourists and enthusiasts from near and far will continue to enjoy the Prairie Dog Central for years to come, proving that it’s “More than just a train ride.” This is one Manitoba success story that keeps chugging along.

For more information and to book your Prairie Dog Central adventure, visit pdcrailway.com or call 204-832-5259.