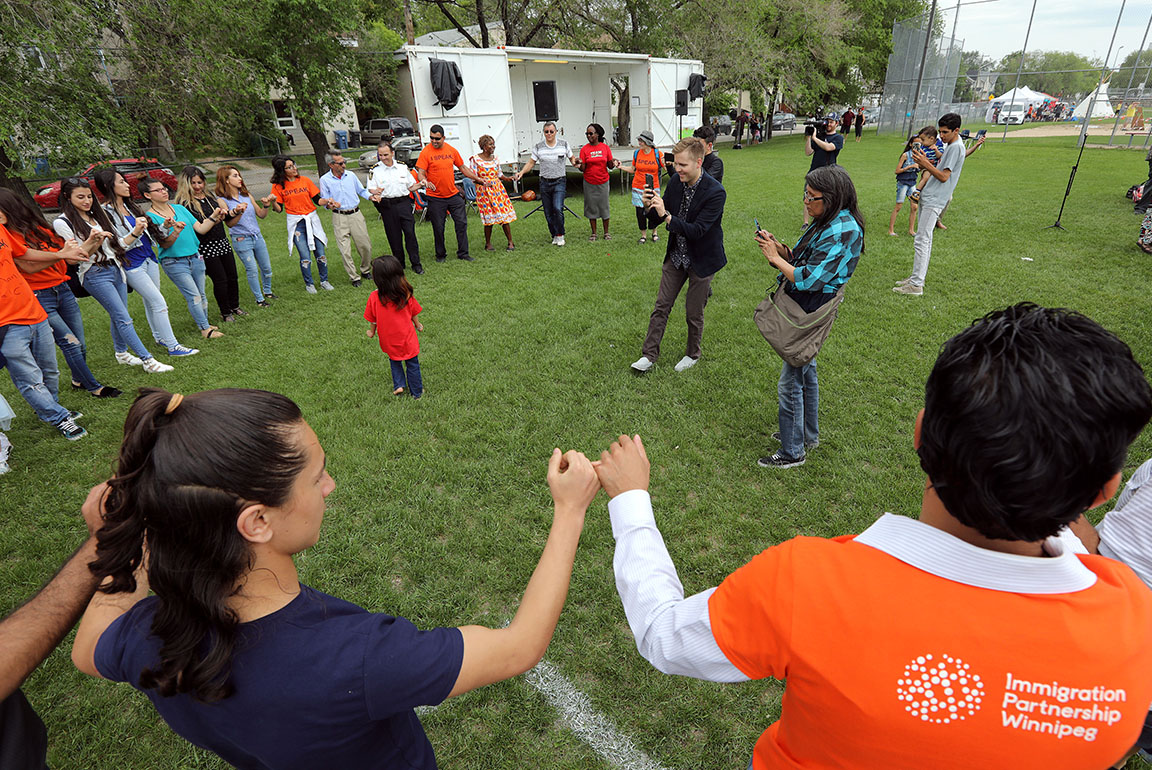 With a carnival-like atmosphere, a recent event in central Winnipeg offered up a warm welcome to our city’s newest Canadians while connecting them with important resources to help them settle and thrive in their new hometown.

Organized by Immigration Partnership Winnipeg (IPW), over 2,000 people attended the 3rd Annual Newcomer Welcome Fair this June at the Freight House in Winnipeg’s Centennial neighbourhood. For attendees, the event was a pivotal opportunity to connect with local people and resources that could greatly enhance their quality of life in a new country.

Creating connections for all new Winnipeggers

Welcoming new immigrants and refugees to the city, the event provided a festive setting while offering opportunities for new families to learn about the services and supports available to them in Winnipeg. Music and dance groups from the city’s diverse cultural communities even took to the stage to entertain the crowd as kids enjoyed fun and games, face painting, hot dogs and ice cream.

The day provided a one-stop shop to connect with social, recreational, language and housing services in the city. Representatives from many governmental, community organizations and businesses were also on site to answer questions and make real connections with members of the new immigrant and refugee community.

Newcomer Welcome Fair on the grounds of the Freight House.

IPW director Abdikheir Ahmed, who came to Canada 14 years ago as a refugee from Somalia, says the event is about creating connections among all Winnipeggers.

It’s important to connect newcomers with programs that provide support to them because we don’t want people suffering from isolation without knowing what exists for them. That’s why we’ve put together all these services,” Ahmed said.

Friendly volunteers were on hand to help attendees break down any communication barriers, with easily recognizable bright orange ‘I Speak…’ t-shirts that were customized to show which languages were spoken.

The event was co-sponsored by Immigration, Refugees and Citizenship Canada, the Social Planning Council of Winnipeg, the Citizen Equity Committee, MANSO, and Assiniboine Credit Union, which provided sponsorship funding of $5,000.

Evolution of the event

Now in its third year, the fair has already seen quite the evolution. In the inaugural year, the event only involved Syrian refugees, while last year’s fair hosted a select group of newcomers to Canada. Ahmed said it was important to expand the event this year so the community at large could welcome all newcomers.

“It helps newcomers connect,” Ahmed said. “When I came here, there weren’t as many programs. We’re learning from what we have been doing and we’re doing more things to welcome people.”

IPW is also actively working to connect the newcomer community with the province’s Indigenous community.

There are many Indigenous Peoples who are themselves coming to this city as newcomers. Just like newcomers from other countries, we all share similar struggles and experiences, so we’re part of this society together.”

Ahmed also explained how the newcomer fairs have had many tangible impacts. “Since we’ve been holding this event, the number of applications from new Canadians to subsidized programs with the City of Winnipeg has doubled.”

When it comes to making real connections, one Somali refugee who came to Canada 15 months ago with no family or connections has since found his home and started on the path to his dream career.

Abdi Hussein, 20, fled Somalia after his father was killed in a bomb attack. Now in Canada, he has been embraced by members of Winnipeg’s Somali community who have also helped him enroll in a program at The Momentum Centre.

Through the program, which helps new Canadian and Indigenous young adults between 18 and 30 launch their careers, Abdi connected with Assiniboine Credit Union, where he has been hired as a member services representative. Since his teens, it’s been Abdi’s dream to become a banker, and the eight-month program taught him communication skills, gave him work experience and helped him adapt to a new culture.

In addition, Abdi’s refugee claim was accepted in May and he has applied to become a permanent resident of Canada. “It feels really good,” he said. “I didn’t want to let go of my dream. I feel like I’m free and I don’t have anything to worry about now.”

With plenty of praise for the fair, he also had encouraging words for other newcomers who may be in similar situations.

People get to see that you shouldn’t give up because you’re a newcomer or because you don’t know the language yet,” he said. “You come here and meet new people and you learn a lot.”

Sheppard-Luangkhot explained how ACU is always looking for ways to reduce barriers for new Canadians. “We have a newcomer program geared toward anyone who has been in Canada for five years or less to qualify for some free financial services and to help them establish themselves here,” she said.

“Building community and ensuring inclusion is important to us, so it’s a simple decision for ACU to be here,” Sheppard-Luangkhot went on to explain. “It’s about creating opportunities for people in our community, and especially newcomers.”

It’s a one-stop shop for resources and service providers here, instead of an individual having to bus around to several locations or a mother with three kids trying to navigate a new system. This makes it so much easier. It’s an amazing event and it’s all about the community coming together.”