Home Blog Diversity Food Services lives up to its name

Diversity Food Services lives up to its name 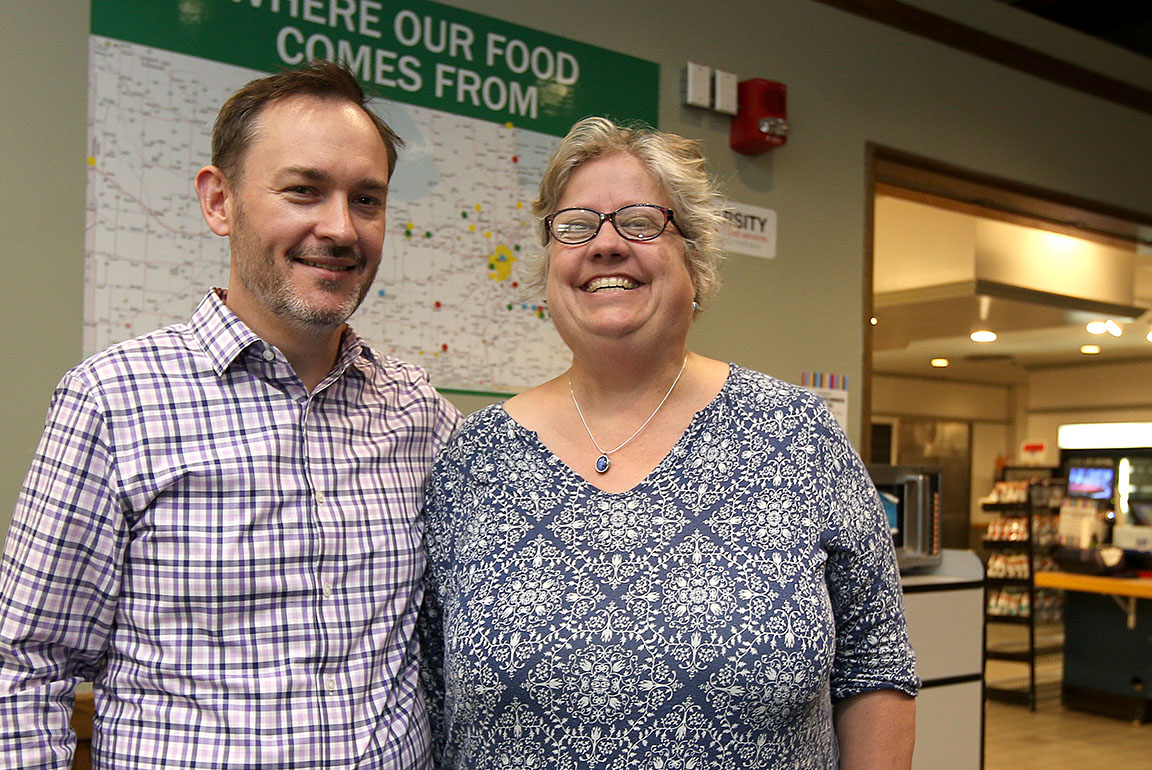 This Winnipeg business is forging a new path — and gaining worldwide recognition.

Diversity Food Services has more than lived up to its name over its nine years in business as the University of Winnipeg’s food service provider.

Launched with the goal of becoming Canada’s only fully independent post-secondary food service provider, Diversity has thrived on its principles of hiring a diverse staff and sourcing local supplies wherever possible.

As a joint venture of the University of Winnipeg Community Renewal Corporation (UWCRC) and SEED Winnipeg, Diversity was founded on four pillars of sustainability — environmental, social, cultural and economic — and has worked hard to build on all.

In terms of environmental sustainability, Diversity boasts a very low rate of waste with its food supplies (less than one per cent) and all its packaging is 100 per cent compostable and biodegradable. The organization also follows a real-food philosophy, preparing dishes from scratch with minimal processed ingredients.

This stellar track record has not gone unnoticed. Diversity has won sustainability awards from the Sierra Club, Leaders in Environmentally Accountable Foodservice (LEAF) and The Association for the Advancement of Sustainability in Higher Education (AASHE). In fact, the 2017 AASHE award named Diversity’s U of W operations the highest-scoring Canadian campus (and third overall in North America) on its campus sustainability index.

The organization has also thrived financially thanks to a diversified strategy of adding business streams outside of regular school months, which has helped provide a steadier year-round income for both Diversity and their employees.

At the U of W campus, they operate out of five main locations including Pangea’s Kitchen in Riddell Hall, Elements in the Richardson College for the Environment and Science Complex, Café Bodhi in the Duckworth Centre, Tony’s Café in Leatherdale Hall and The Malecón in Centennial Hall.

In addition to food service operations on the U of W campus, Diversity operates the Buffalo Stone Café at FortWhyte Alive.

They have also extended their services to a catering operation that serves many businesses, institutional and social events in and around Winnipeg. And to round out their offerings, Diversity To Go products are available at Vita Health stores in Winnipeg.

A history of diversity

Diversity Food Services got its start in 2009 when the UWCRC was tasked with creating a food service company to provide quality food for the U of W’s expanding student body. That task came with the added goal of sourcing local supplies wherever possible and looking to hire people who are often excluded from the labour market, such as Indigenous peoples and new immigrant and refugee communities.

I think we’ve been able to go further and further into our pillars of sustainability the longer we’ve gone,” said Kirsten Godbout, Diversity’s Manager of Food Operations. “You start with a vision, but if you’re not actively maintaining the business part of it, you don’t get to dig as deep into the other pillars.”

Over Diversity’s first four years, the business worked to establish itself while meeting all its social mandates. That’s where current Chief Operating Officer Ian Vickers entered the picture. At that point, the organization started looking to grow the business off campus.

“We invest in these counter-seasonal, counter-cyclical businesses. Between those and our catering, this year for the first time, we didn’t have to lay anybody off for the summer when the students go home,” Ian said. In 2012, Diversity employed 60 school-year staff members and 12 off-season employees. Now, there are 100 employees during the school year and 80 in the off-season.

But he adds that the new ventures are not simply about adding revenue.

“Because we have the multiple bottom line model, we don’t just look at something and say, ‘Hey, this thing can make us money,’ ” he said. “We look at it and see that it’s going to create more hours for our people and help us have longer, better relationships with our suppliers, throughout the year.”

We’re not a traditional social enterprise or a traditional foodservice business. We just happen to be owned by two not-for-profits who tell us to take what would normally be the owner’s share of equity and redistribute it into the social mandate of the company. That means our average hourly-paid employee makes a living wage and has a benefits plan,” Ian said.

“It’s in moving from being a $2.5-million business to a $5-million business where there’s an incredible opportunity now to bring people to a living wage,” Kirsten said. “This year we added $500 healthcare spending accounts to each employee’s benefits package.”

Diversity aims for a tangible social return on investment, supporting the Manitoba economy by sourcing from truly local producers and by offering solid employment opportunities to people who simply need someone to provide them with an opportunity to demonstrate their value to the labour market. This includes people coming out of the criminal justice system or those on social assistance.

“We look at those four pillars in a very equal way,” Ian added. “How do we get the most environmental, social, cultural and economic sustainability throughout the system?”

A unique and well-respected business model

While Diversity’s mandate is for 65 per cent of staff to come from populations excluded from traditional employment avenues, it has now hit 72 per cent.

Since a business model as a social enterprise post-secondary food service provider is unique in Canada (and rare globally), Ian explained that they have attracted interest and visits from educational institutions in other countries.

Here we are doing this weird thing where we’re not a department of the university — we’re actually a rent-paying tenant — and we’re not one of the big food-service companies,” he said. “That means we have to do everything the hard way. For example, none of the point-of-sale systems are designed for us. Instead, we have to get ours custom-built.”

And Diversity is not finished branching out. They are now involved with the U of W’s new Manitoba Food History Truck in partnership with Dr. Janis Thiessen, U of W Associate Professor of History and Associate Director of the Oral History Centre, as she and her team research the history of food in Manitoba.

The truck will also be used this year to complement Diversity’s catering business at events held on private property. “It will potentially offer us a chance to give our employees another opportunity for work,” Kirsten said.

Sourcing from within Manitoba

Diversity purchased ingredients and supplies from 162 different local suppliers in the last year and has used more than 430 during its time in business. The company takes pride in trying to source as much as possible from close to home. Ian said about 65 per cent of operating purchases come from small family farms within 100 kilometres of the campus operation.

We’re able to cook with real ingredients, minimally processed, and make it work,” Ian said. “And because we’re buying locally, all the chicken we’re buying is raised without antibiotics and we’re serving locally-farmed, grass-fed local beef.”

While not all ingredients can be sourced close to home (such as coffee, pineapples or bananas), Diversity is constantly trying to follow the trail back, to make sure there’s no forced or child labour and that ingredients are sustainable. “We’re working to make sure the companies we’re dealing with are as ethical as possible,” Ian said.

The organization has also been sourcing honey, in partnership with Winnipeg’s Beeproject Apiaries, from its own beehives on top of the Duckworth Centre. Soon, they will also be producing more of their own herbs and vegetables in a greenhouse on the fifth floor of the U of W’s Centennial Hall.

Right from the start, Diversity has worked with Assiniboine Credit Union, who partnered with Jubilee Fund to provide the initial financing. Since they support numerous smaller local suppliers, the company doesn’t usually get to benefit from the terms of credit offered by large food-service suppliers.

We’re working directly with farmers and they can’t give us 30-day terms — they need cash,” Vickers said.

“We run our business off a chequing account, a savings account, a couple of credit cards and a revolving line of credit. Our relationship with ACU is strong and they’ve been supporters of ours from the beginning. It’s a real asset to have a partner like ACU.”