Home Blog This Winnipeg golf business is a family affair

This Winnipeg golf business is a family affair 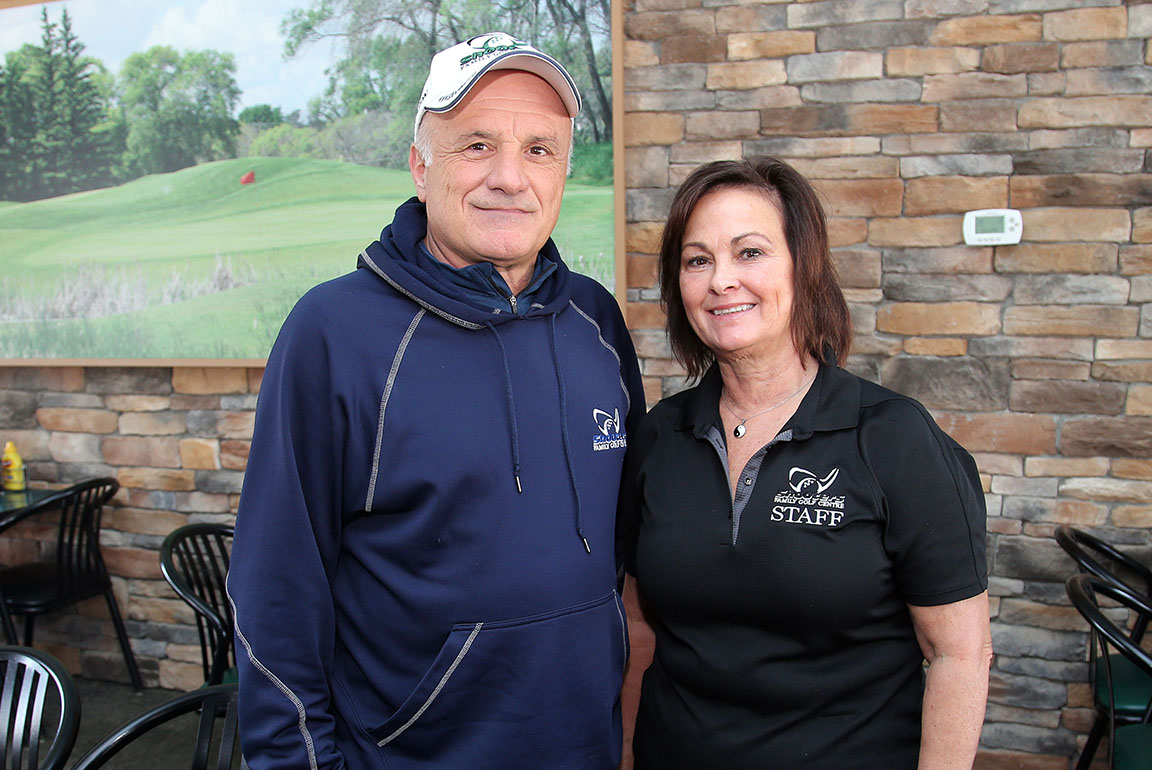 Shooters Family Golf Centre truly lives up to the ‘family’ part of its name, and offers a little something for everyone — whether it’s a relaxing game of golf, a thrilling mini-golf experience with the kids, corporate tournaments, special events, weddings or just a delicious bite to eat with friends.

Located at 2731 Main Street and bordered by the picturesque Red River to the east, Shooters features an 18-hole, par-57 golf course, a 100-station driving range (with a number of grass tees), 18 holes of miniature golf and a pro shop. Open year-round, the clubhouse features a restaurant, an outdoor patio in summer, as well as a golf simulator to keep practicing your swing — even when there’s snow on the ground.

We built it from scratch,” said Shooters President, Guido Cerasani. He and his wife started the business 26 years ago on the site of a former driving range that had closed prior to their purchase.

“It really has been a work in progress,” Guido said, having started out with just the mini-golf course and a driving range. Then, as adjoining land was purchased, they added a nine-hole golf course before eventually expanding to the full 18 holes.

Both Guido and his wife, Sue, worked in corporate banking for a national bank before opening Shooters.

I was always entrepreneurial in spirit,” said Guido, who has also owned a mail order/import business and an irrigation company. “When I became a corporate banker and started golfing at private clubs with my clients, it could be intimidating. I thought, ‘One day I’m going to build a golf course where everyone’s equal,’ and then we became the city’s first family golf centre.”

At the beginning, the couple was on double duty, as Guido still worked in banking when he started building the course and Sue was home with the babies.

“I would leave work and come here,” he recalled. “I’d hop on a loader or grader until dark and then go home. It was basically farmland.”

Fun & friendly golf for all

From the start, Shooters aimed to be an inclusive, fun Winnipeg golf experience.

“Our biggest thing is that we’re family-friendly and welcoming,” Guido noted of their vision. “We’re not a big-ticket golf course. You can play 18 holes for less than 30 bucks.”

In addition to Guido and Sue, the couple’s children, Amy and Eason, have been involved with the business their whole lives.

The kids have grown up here,” Guido said. “Our son runs the pro shop and our daughter runs the restaurant and food services. We see a lot of family groups come here and now they’re pretty much like part of our family. They talk about how they remember our kids when they were tiny and sitting in the ball bins.”

Shooters employs about 50 people during peak business, and works to keep most staff on year-round.

“Many kids from the neighbourhood have worked here over the years, selling balls or getting people out on the course,” Guido explained. “We’ve had a few that have done everything here, inside and outside.”

A better business partnership with ACU

The Cerasani family first connected with Assiniboine Credit Union in 2009, when Guido and Sue were interested in purchasing the neighbouring Northgate Trailer Park.

ACU had just built the branch over here, so I reached out,” Guido recalled. “The big thing with ACU is having that personal relationship. My account manager has never changed since I started with them. That’s huge.”

Gary Farrell, Senior Business Account Manager with ACU’s Business Financial Centre (BFC) has become a part of that extended Shooters family. Guido praised Gary for going well above and beyond the more traditional impersonal, formula lending that you might get at other financial institutions. To the Cesarani family, the BFC’s approach was a big advantage.

“Gary listened to us when we wanted to buy the trailer park,” he said. “I was able to leverage the equity (at Shooters) to support it. ACU totally understands us, and Gary has a great feel for what our business is all about.”

Recently, the Cerasani family turned to the credit union again to finance the expansion of the trailer park back to the river, adding 81 lots and nearly doubling it in size. The park has been renamed River Grove Mobile Home Estates.

“There seems to be a strong demand for this kind of housing,” Guido said. “We find it’s mostly seniors in the area who want to downsize, and they don’t want a condo or an apartment. This gives them a great option.”

As for the evolution of the golf business, Shooters may look to overhaul its miniature golf area.

“You never know what the future holds,” Guido said.

One thing that is certain is the family’s focus on charity. Every September, Shooters hosts the popular Survivor Golf event in support of Diabetes Canada. Inspired by the reality TV series, players are guaranteed four holes of golf — but elimination starts after three warm-up holes, with the player who scores the highest bowing out. Over the years, the event has raised nearly $20,000 for the charity. Shooters also supports Swimability and many other charities.

ACU has also stepped up for Shooters’ charity events. “They have supported tournaments, and Gary has played in Survivor Golf and has donated prizes,” said Amy.

For this Winnipeg family business, the future holds a lot of excitement and fun — complete with a community-minded focus that will no doubt build more happy golf fans for years to come.

To book a Winnipeg golf activity, fun outing, tournament, special events or catering, visit Shooters Family Golf Centre. Learn more about ACU’s Business Financial Centre and how they can support your business growth strategy now and into the future.